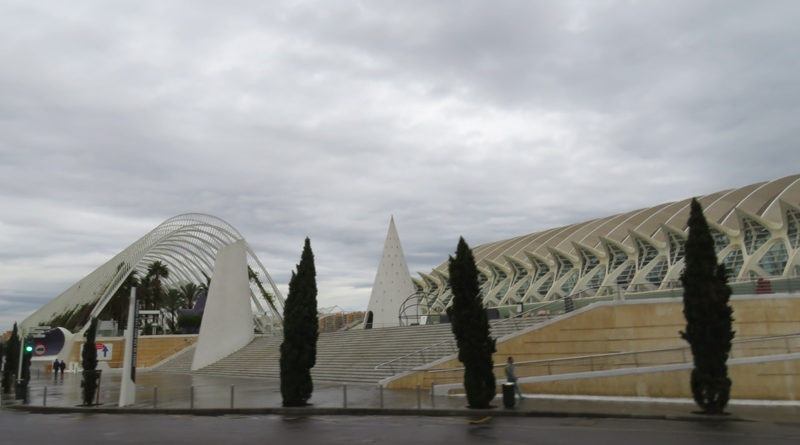 I was really looking forward to going into Valencia but it was pelting down with rain while we had breakfast and as Darren had work to do we decided to move to an aire with electric hook up.  Our neighbour was using his generator yesterday so we used ours for a while too but unfortunately it can’t be used in the rain so we needed electric hook up.

By a stroke of luck the junction we needed to turn off at to by pass Valencia was closed so we had to drive through a part of the city and that was when we saw the AMAZING modern architecture.  My voice became high pitched with excitement when I spotted a building that looked like the head of a blue whale coming out of the ground and then noticed the other beautiful modern structures nearby.  Lynn and Darren had shown us photos of some of the modern buildings in Valencia and they were eye catching but seeing them up close was awe inspiring and both Darren and I decided that we MOST DEFINITELY have to come back when the weather is better so we can cycle in for a really good look.

We’ve passed a lot of fields full of mandarin trees heavily laden with their fruit but one poor farmer is going to have his work cut out for him today, the storm last night had knocked most of the fruit off his trees and it had formed a bright orange carpet on the floor.  Hopefully the fruit was ready to be picked and it has saved him that trouble.

We had to drive up a rather steep hill at one point and unusually for us we were catching up the lorry in front of us who had his hazard warning lights on, as we overtook him I looked over at the driver who was pretending to be very nervous about not making it up the hill and was biting his nails in a theatrical manner, it gave us a good laugh.

We arrived at the village where the aire was situated and yet again the SAT NAV tried to take us down a teeny street, luckily Darren spied an official sign giving directions to the aire and although it was down through the houses it wasn’t scarily narrow.  We saw the other end of the street the SAT NAV had been trying to direct us down and we’d have been well and truly stuck if we’d gone that way.

We weren’t sure how to get in when we arrived, we could see some motorhomes in a fenced off area but no sign of how you got in there, eventually we came to a gate at the bottom of a hill which had instructions to phone and the owner would let us in.

It looks like a nice little aire, it’s in a secluded spot and seems nice and quiet, I wonder whether they too have a cacophony of mutts round here to serenade us this evening.

After the owner had let us in we parked the van and went out to explore and find some lunch before Darren got on to do some work.  The rain had stopped and the sun had come out (perhaps we could have gone to Valencia after all).  The owner had given us a map with various points of interest marked on it however we only had a short while to explore due to the work Darren needed to do and the threat of rain so we set off through the deserted streets to see if we could find a restaurant for lunch, as we wandered through the tiny streets we found a pretty church and then caught sight of a ‘BAR’ sign with a menu board leaning against the wall, we weren’t too hopeful because from the other side of the road that looked as closed as everything else in the village (we really thought we’d got the timing right this time but maybe not).  We peered through the glass door and noticed a couple of people sitting at a table so we decided to go and see whether food was still being served.

We were greeted by a lovely smiley man who was seemed very pleased to see us. Darren asked whether we could see a menu and the man replied with a volley of Spanish words but we made out the word menu in there so sat down and waited for the menu to arrive.  It eventually dawned on us that he must have thought Darren had said we’d have their set menu, which wouldn’t have been a problem if I ate meat, however……..!

He asked us in Spanish what we’d like to drink and we asked for beer, and I went with him to the counter to choose a beer, I asked for “dos cervezas por favor” (very hesitantly) and I was greeted with a lovely smile and a thumbs up, he seemed genuinely pleased that I was trying to speak Spanish however badly.

The owner set the table and bought out a bowl filled with aioli and a basket of fresh bread, it was GORGEOUS.  Then he returned with two bowls of pasta (we’d been hopeful that the first course would be a large salad like the couple at the other table were sharing but no such luck!)  There was no way I could offend him so for the next 20 minutes I tried to surreptitiously scrape off the bits of meat on the pasta while Darren picked out the large chunks and put them on his plate.   I’m ashamed to say I didn’t scrape my plate clean on this occasion.  The owner whisked the plates away and came back with two plates with potatoes and whole cooked peppers on them and 4 slices of pork on it.  That was much easier, Darren took the meat and I had his peppers.  That part of the meal was very tasty.

When we’d finished the owner came back with a piece of paper where he’d written down the deserts and he rattled through them, I heard the word Tiramisu and rather than try to ask him to go through them all again I asked for that, Darren however chose the ‘I’ll have the last option’ which unintentionally turned him into the ‘golden boy’.  The man’s wife came out with our deserts and was thrilled that Darren had ordered his little pot of custardy stuff which had an unusual consistency, it was dense at the top and became more runny as he got to the bottom ( I tried some and it was very nice), we gather she’d made that and that the Tiramisu was a ready made one.  She kept popping out with a big smile on her face to see whether Darren was enjoying his desert and was very pleased to see he was.

Darren decided to order me a carajillo (coffee with brandy) our friend Lynn had introduced us to that and she’d been very generous with the brandy nevertheless we were VERY surprised to see the owner put a shot of coffee into the cup then fill the other half of the cup with brandy!  Oooh!

We had assumed that the meal was the menu del dais and a set price and that the coffee would be extra but when the bill arrived they’d included it all in the set price so for the 2 beers, a three course meal and bread and aioli AND two coffees and a brandy we were only charged 16 Euros.  We felt very bad for ordering a coffee with brandy so we added a much bigger tip in the hopes that would cover the cost of the brandy.

We wandered back to the aire all the while trying to find the Font de Sis that received top billing on the list of local attractions only to discover that it was the roofed thingy that we’d seen as we left the aire earlier on our quest for lunch!  Apparently they weren’t running water through the spouts that day so it had gone unnoticed previously.

We spent the rest of the day in the van while Darren did his work, it was a nice relaxing day.