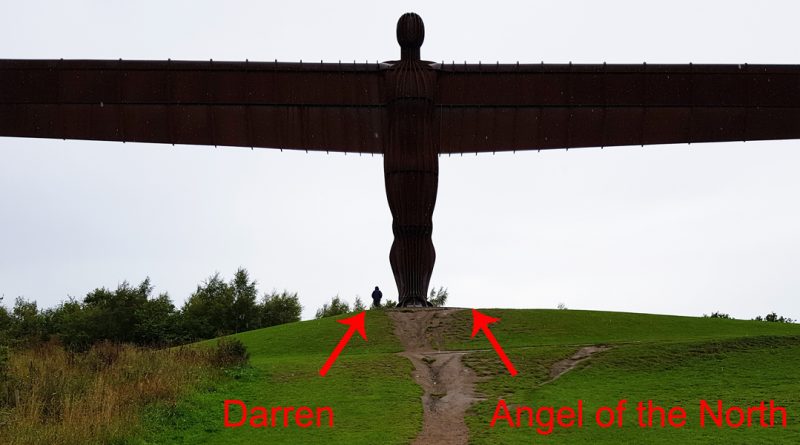 It was spitting with rain when we got up this morning, we nearly phoned ‘Woven’ to ask them to send the jeans home in the post so we didn’t have to walk into town but then we decided that was too lazy considering they’d rushed to make the alterations for Darren.

As we were about to leave the rowing club, I stood in the rain waiting for Darren.  At the same time the motorhomers opposite us got ready to pull out so I waved goodbye to the driver.  He opened the window and called out, “What are you doing out here, it’s a duvet day!”  I shouted back, “If only!  Unfortunately we’re leaving today too”.   I was rather surprised when he hopped out of his van and wandered over for a chat.  He asked where we were off to and we told his Bishop Auckland but we explained we were collecting some trousers from town first.  He laughed and said that HE’D gone one better and unexpectedly bought a CAR whilst he was visiting Durham but luckily that was being delivered to his home in Cornwall for him.

He asked where we came from and when we told him he informed us that he’d been born in North Camp, which is about 20 minutes drive from our home and that he used to go swimming 5 minutes walk from our house.  What a small world.  We commented on how tight the entrances seem to be at most campsites and wondered how he managed to manoeuvre a big motorhome and tow a car, he informed me that he used to be a lorry driver.  We mentioned our broken wing mirror and he pointed to the metal plates in front of his which he called Cornish guards. Must get some of those.  At that point he suddenly realised the time, said a hurried goodbye and drove off.  I bet his wife had been wondering where he’d disappeared to.  He must have been absolutely soaked because he hadn’t been wearing a coat.

We rushed off back to ‘Woven’ to collect Darren’s jeans, we were a bit early as it turned out but the assistant popped up the road to collect them and wrapped them beautifully in tissue paper and put them in a nice bag.  Shopping at ‘Woven’ has been a very pleasant experience.  Considering how much we hate shopping that is great praise indeed.

We’d decided to go to ‘Split & Glory’ for one more ice cream before we left but they weren’t open until 11 a.m. and we couldn’t hang around that long so we had a quick walk up the hill to look at the outside of the Cathedral and had started our walk back to the rowing club when we noticed a sign outside a tiny doorway saying ‘Waffley’.  As they were open we carefully navigated the steep staircase and arrived in waffle heaven.  We decided to have savoury waffles but then I noticed a waffle with strawberries which I haven’t had since Norway, I was torn with indecision until the assistant said she could do half and half!  Yippee!

My sweet waffle was strawberry, cream, strawberry sauce and almond, yummy. Darren’s was banana, caramel sauce, peanut butter and ice cream, also yummy.  What a great start to our day!

We rushed back to our van, stopping briefly when Darren noticed that the railings and wall beside the path were no longer as pristine as they had been 45 minutes earlier when we’d passed by, now the railings were buckled and the bricks were all crunched up!  A dustcart was busy emptying wheelie bins a bit further along the road, he’d had to reverse up the road, was he the culprit we wondered?   The only person who knows the answer to that tantalising question isn’t telling!

Once we got back to the van we headed off.  Once again we asked ourselves WHY are the entrances to most campsites VERY narrow!  Our theory is that if you can’t manoeuvre your large vehicle well enough to get in then they don’t want you wrecking their campsite, fair enough.

I’d programmed the SAT NAV to go to the Angel of the North first then to our campsite in Bishop Auckland. Unfortunately I didn’t realise I needed to put the campsite in first. We were a few miles from Bishop Auckland when Darren saw a sign and stopped to check the SAT NAV, it was taking us to the campsite first which was in the opposite direction to the Angel!  So off we went again, retracing our route.

It turned out to our advantage, we arrived at the Angel just as one group of people left and minutes before the next lot arrived so we had the area to ourselves and consequently I took lots of photos.  I’m so pleased to have finally seen the Angel up close it’s such an amazing piece of work.

From there we drove the 45 mins to the campsite stopping en route to put air in the tyres and get some shopping. Our SAT NAV tried to send us on a merry jaunt as we neared the site but luckily I was following Google maps so we ignored our daft SAT NAV’s instructions.

The farmer and his wife were lovely.  As we were the only van staying we were put in the field near the house which was nice because it’s surrounded by trees.

The farmer wandered over to chat to us, he told us they used to own a lot of land but sold most of it when his dad died.  I’ve always thought the life of a farmer sounded extremely hard and what he told us confirmed my suspicions.

He said that as a young man one of his jobs was to sow the fields.  He had to do that manually by taking small steps whilst dipping his hand into a container filled with seed, then scattering it by hand whilst a horse followed along pulling machinery which turned the soil to cover the fallen seed.   He said he had acres of land to cover stopping only for 2 hours for lunch and a pint before returning back to sowing.  Apparently one day he had a brainwave and utilised a piece of equipment that was designed for a different task.  When he returned home just after lunch his dad told him he needed to get out and continue the sowing and was astounded to hear that his son had already managed to complete it using this tool.  Apparently they continued to use it from there on in.

The farmer told us that his work didn’t stop until late in the evening because every day he had to milk the cows and muck them out too.  He would start his day at 5.30 a.m. and worked 7 days a week. He was 81 years old now and enjoying just (!) having 6 acres which his wife runs as a campsite.  I can completely understand why he’s enjoying his more relaxed lifestyle.

A bit later we popped over to the house to pay and their son told us the best way to get to Kynren tomorrow evening.  I do hope it doesn’t rain because it sounds like there’s going to be a lot of walking involved!

In the evening our son Austyn Skyped us from Peru and we had a nice chat with him for a couple of hours until bedtime.  He is seeing such interesting things on his trip but I’m really looking forward to him coming home for Christmas.