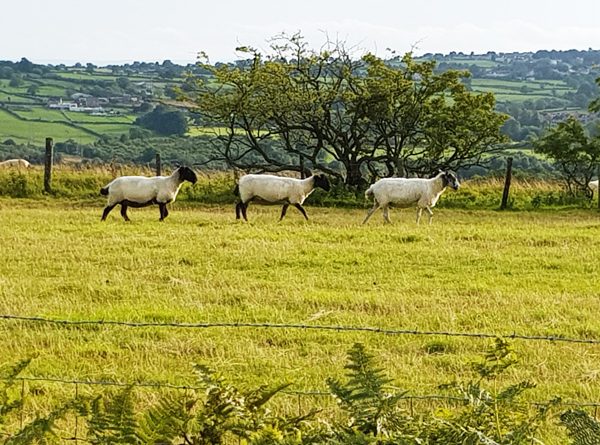 We had a very slow start to our day.  We sat and read and had a bit of a moan when it began raining at 2 o’clock because we were shortly due to walk the mile and a bit to the village of Toronto to see Kynren.

As it turned out we were very lucky and it was dry during the evening.   The walk to the venue was rather horrible, we had to walk along an uncut grass verge with a ditch to one side and it ran along side a busy road so it took rather longer than it should.  I kept worrying that we’d miss our footing and end up either under a car or in the wet ditch.

We passed the car park that I’d booked to park in before we knew we’d be travelling up in the motorhome.  As we walked towards it I suggested we could jump on the shuttle bus as we’d paid for it but Darren wanted to walk (we’ve got a lot of ice cream to burn off!).

We were a bit disappointed to note a long path zig-zaging down to the venue when we arrived at what we’d assumed was the entrance to Kynren and my feet were even more disappointed when the bus we could have taken arrived at the venue as we were halfway down the path but, on the plus side, the view from the path at the top of the steep hill looked out over Kynren which made the walk well worthwhile.

That was an exceptionally long mile and a bit, I’m beginning to think we miss calculated and the ‘bit’ was another mile at the very least.

Darren spotted an ice cream stall as we eventually arrived at the venue so we bought coffee and ice cream and asked if we could share a table that two ladies were using.   They were very nice, they’d travelled down on a coach from Newcastle.  One of them said they were there because her sister, who apparently never praised ANYTHING, had visited the previous year and couldn’t stop talking about how great it was, we were pleased to hear that.  Apparently over 1000 people take part, on the stage and behind the scenes and they’re all volunteers.

The other lady told us her young grandson had recently come up from Brighton to visit her and he was very puzzled that everywhere he went people ruffled his hair and gave him a coin.  She said people do that to young children up here as well as putting a ‘silver’ coin in the palm of a baby’s hand.  I’m sure that used to be a practice down South when we were young.  They also asked if we’d been to see the Angel of the North and mentioned that the Angel of the North had once had a football shirt made for him, that must have been a sight to behold.

We had a nice long chat with them then thought we’d better go and look at the blacksmith and some of the animals at the animal croft who were taking part, before that area shut. There were two big chunky horses called Percherons there which were originally bred as war horses in France and there were some unusual breeds of sheep, cows and goats and a large flock of white geese.

Once we’d looked at those I was drawn to the fish and chip stall.  We had some GORGEOUS chips there, far better than any that I have had for a very long time, they were superb, golden brown and slightly crispy with ‘scraps’ on top, I felt sad when I’d finished them knowing I wouldn’t be able to come back here for more but I was very glad that we’d both had a tray each so I hadn’t had to share!

We made our way into the stands and found our seat, it was right at the front so I’d have no one’s big head in my way for a change.  We’re both very pleased that we had such a good view because the show was out of this world.   We couldn’t believe the huge amount of scenery that rose from the lake during the performance and the spectacular costumes.  The horsemanship was fantastic, at one point a Roman soldier was dragged along the ground at high speed behind a horse and a bit later a Viking rode across the scene with both him and his horse on fire!  There were lots of great lighting effects on fountains and pyrotechnics, it was a shame when it finished although intermittent drops of rain started falling just as the last actor left the stage! Kynren was well worth coming to see, we’re definitely coming to see it again.  We were very impressed by how well organised everything was, the stewards ushered us to the correct exits and then on to the correct buses with red and green lights depending on which car park you were going back to.  We were lucky enough to get on the third bus to leave.  We hopped off at the car park in Toronto and the walk back from there was much quicker, luckily the car lights lit most of our way although Darren was nearly wiped out when a car decided to overtake another car that was on the other side of the road.  That was rather unexpected!

We got back much quicker than we’d expected and chilled out with a cup of tea before bed.

What a stupendous day.