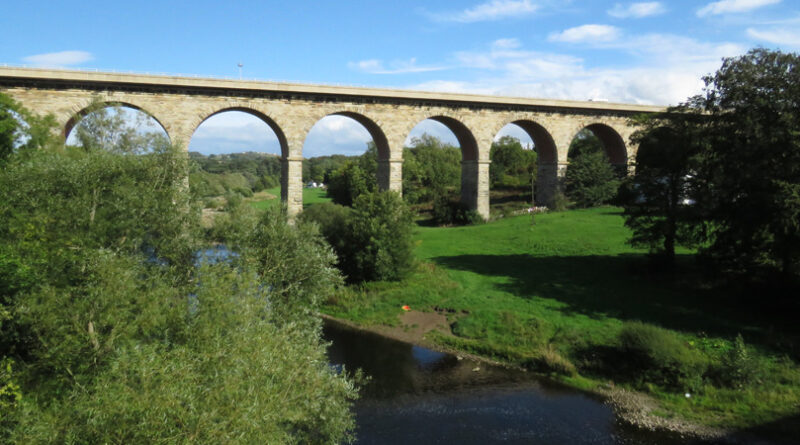 After a very late start to our day we walked up to The Dairy Barn for breakfast which by the time we got there turned out to be lunch.

The countryside here is beautiful and there was a lovely view out of the tearoom window out across the fields.  It looked as though the building must have been a cattle shed originally as it still had the metal feed racks on the wall.  We decided, as it was lunchtime, that we should have a sandwich as well as ice cream.   Our toasted sandwiches were very nice and our coffee and ice cream were extremely tasty.

To make an attempt to work off some of the calories we decided to walk from The Dairy Barn into Bishop Auckland but not along the main road this time!  As we left the tea room we watched a mist coming towards us across the fields and I rushed to put on my waterproofs but by the time I’d completed my task the rain had blown past!

We retraced our steps back past our campsite, through the village to the trail which runs along a disused railway line into Bishop Auckland.

It was beautiful, it took us past the entrance to Kynren and then instead of continuing up to and over the seven arches bridge, at Darren’s suggestion, we took the lower path and started to cross the river on the smaller bridge that was built in 1013, how amazing to build something that has survived for so long.

As we headed towards the road I noticed a small gap in the bridge wall, it had steps going down to the river so we squeezed through and walked along beside the river until we came to a road up to the castle.

Walking up that steep hill was a killer, I sincerely hope that burned off some of the sugary things we’ve been eating!

On the way to the castle we stopped to look at the local architecture.  It was so eye catching I couldn’t resist taking a photo of the roof of one of the properties.

There was a line of terraced houses which ended with a house with a curved end wall near the castle and placed right beside it was a very modern structure which was both interesting and shocking to see.

I wonder how they decided that that was the place to build it, it did look a bit incongruous given that it was also near the Miners Art Gallery housed in a rather ornate building (which was apparently a bank at one time) but that’s probably the best place to make its presence truly felt.

I’ve since read that it’s been built to look like a siege engine outside the castle entrance.

We discovered that the castle was closed due to renovation work, that was disappointing.

Unfortunately we didn’t get to visit the Gallery, we caught sight of a tea room called Fifteas Vintage Tea Room where we had a  cup of tea, a yummy scone and a tea cake whilst listening to Doris Day and by the time we’d finished the Gallery was closed.

We left the tea room and decided to make our way to the bus station because the town was deserted.

We had a false start as we headed off in the wrong direction.

When we got to the bus station there were no buses to be seen but there was one taxi so Darren wandered over to see if she’d take us to the campsite.   She was very apologetic but was apparently waiting to collect someone.  However she very kindly gave us a phone number which Darren called only to be told they could send a taxi in 30 minutes, they also kindly took the time to give him another phone number to try, they could send one in 45 minutes so Darren booked a taxi with the first company just as a bus pulled up in the bus station with a sign that said it was going to Crook (which is in the vicinity of the campsite) so we rushed over and I asked the driver whether she went near Hunwick (where we were staying), worryingly she’d never heard of it so I asked whether she drove along the road from Toronto to North Bitchburn, she said she did but didn’t know if there were any bus stops near where we needed to get off.  Luckily at that point two local men joined in the conversation and one of them told her at which bus stop we needed to get off.

While we were on the bus Darren cancelled the taxi and the kind men gave us the head’s up as we neared our stop and rang the bell for us, realising as they did so that they’d rung it too soon so shouted up the bus to the driver “Don’t stop here it’s the next one!”  As she got to the next stop they rang the bell again, it was quite a way after our turning and one of the men was quite ‘cheesed off’, on our behalf, that she hadn’t stopped on the corner to let us out, I could see her point of view, it wouldn’t look good to have a car run into the back of the bus! As we got up from our seats one of the men said “You’ll be needing a cup of tea when you get home!”  He was quite right about that.

What lovely people, we thanked them for their help and they waved as the bus drove away.  We have met such a lot of happy, helpful people on this trip.

We feel we’ve done some exercise today,  we walked over 6 miles which is great news it looks like my knee is getting better at last.

Not long after we arrived back at the van another motorhome arrived so we now have a neighbour.

We settled down for the evening to have a read and later watched Vanity Fair.

I would like to revisit Bishop Auckland again, there is so much to see that we missed out on.  We’ll have to arrange another trip to see Kynren and spend a bit more time exploring the area properly.