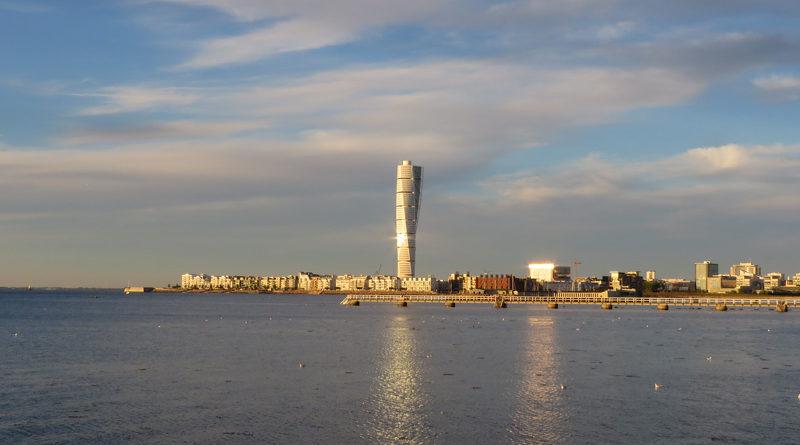 Our first stop today was a very early visit to a HUGE Lidls type shop called Gekås or as Darren called it after we’d walked round it, Lidl’s Big Daddy, which we’d been told about by the Dutch couple that we spoke to at the rastplats near Torsby.  They told us it was so big it had become a tourist attraction.  It was handy that Gekås had had the foresight to provide their own ställplats near the shop.

We decided that we’d get there when the shop opened at 8 a.m. but true to form didn’t make it until 8.30 a.m.  We hate shopping and we’d seen the vast car parks so could imagine the horrors to come when they filled up later.

We had a short list of things we needed to buy and found a few of them but, true to form, also ended up buying things we didn’t know we needed!

The highlight of our visit was the snack we had in the café.  We had a freshly made cheese and salad roll (it was a nice substantial bread roll not a puff of air) with an apple plait pastry and a refillable coffee, which was really nice coffee and it was only 70 Kr for the 2 (£3.50 each) that was by far the best value food we’ve had during our whole Swedish trip and it was very tasty!

As we came out of the shop we noticed we’d missed a whole bedding section (which is unfortunate because we remembered when we got back to the van that we really do need to get a smaller Summer duvet our current one is HUGE and far too warm) I’ve no idea how much more we missed but we were all shopped out by that time. [Looking back at this after our year’s tour, we should have made the effort and gone back to get a duvet.  We were unable to find one anywhere else and many a morning I woke to discover I’d thrown the duvet on to Darren during the night and when I peeled back the cover his face was beetroot red from the subsequent build up of heat, poor thing!]

I’m very glad we’d arrived early.  As we walked across the car park we watched people circling the car park nearest the shop (we were parked behind that on the top of the multi-story car park where the motorhomes were directed to park, although we noticed on our way back that a lot of motorhomes had miraculously become coaches and had parked beside the shop in the coach park!  We’re still far too British obeying all the signs!)

As we reached the top floor a car pulled over and asked us a question in Swedish.  Poor man the look of dismay on his face as he realised he’d found the only foreigner in the area and realised he wasn’t going to get any help there so he cut his losses and drove off!

Our next destination was Mölle.  Apparently it was that village that gave rise to the reputation that the Swedes have for being broadminded.  That was because they were the first village to allow mixed bathing at their beaches in the 1800’s and people from all over Europe used to go there for the mixed bathing.

It was interesting to see the change in landscape as we drove along.  Ullared was lush but with large rocky areas and a bit further along the landscape became very pastoral, as we drove past a meandering river we saw a cow standing in the water drinking, she could have been in a painting by Constable.

Our SAT NAV wasn’t very helpful when it came to finding parking in Mölle, in fact it didn’t even direct us into Mölle it sent us up a very steep and windy hill to a nature reserve where we missed the entrance to the small car park (only noticed it because we saw a motorhome in it as we drove past) so Darren turned off the road at the next lane which was signposted to a café.

Unfortunately a short way down the lane was another signpost saying there was a hill with a gradient of 19% going down to the beach so Darren turned the van around on the grass and started to go back the way we’d just come.   I asked him whether we could park at the side off the road, he wasn’t too keen but reversed back off the road for me and the tyres started slipping on the wet grass until we were much further down the parking area than we’d anticipated, I think we both thought we would be spending the rest of our trip stuck in a woodland car park!  Somehow Darren managed to get the van back on to the road, funnily enough I wasn’t very popular!

He drove us back down the windy road and the SAT NAV tried to send us down an extremely narrow lane into the town but luckily we missed the turning so Darren decided to see where the next (wider) road went, it took us into the town as we’d hoped.

We decided not to drive down to the harbour car park which was looking rather full and found a large parking area a bit further away but there was a huge sign which said ‘Buses’ on one side and ‘No Motorhomes’ on the other side where a couple of cars (and later a van) were parked.   By this time Darren had had his fill of Mölle so he turned the van around and was all for heading off to our next destination when I noticed a large white van parked further along the road on the other side of the bay so he parked our van up there making sure we weren’t obscuring anyone’s view from their house.   Nevertheless we still got the ‘stink eye’ from a man sitting on his terrace a bit further along the road as we walked past, so I smiled and waved to him.

Mölle was a very small, pretty town.  We saw a sign for a shop advertising that it sold ‘Vaffles’ and Darren said this was our last chance to have one so, we spent quite a long time walking round the harbour area looking for the vaffle shop.  We eventually asked in the deli and the assistant said the Vaffle shop was closed for the season!  D’oh!

We had ice cream and coffee instead which we ate on a bench beside the sea, the ice cream lady was run off her feet with the long queue of customers so it’s a bit strange that the Vaffle shop had decided the season had ended.  The Swedish children had gone back to school so maybe it was only busy because it was a baking hot day and people had brought their children out for an after school treat.

We left Mölle and drove to the stopover in Malmö, I was dreading going there because I’d Googled Malmö and lots of posts appeared saying it was a dangerous city to visit.  We’d decided as a result that we wouldn’t visit the city so I wasn’t thrilled to hear that we were going to be staying in a car park beside the beach in Malmö, I imagined all sorts of unsavoury people mucking around there after dark.

It was a free car park but it said you could only stay 4 hours which was confusing as we’d found it in a ställplats book.  Darren went over and spoke to a man who’d parked his motorhome there and he said he’d stayed there three times and it was perfectly fine to do so.

Another German motorhome arrived, parked over the back of the car park near the parkland (like we had initially) then he drove further into the car park and parked behind us.  When he got out he wandered around looking confused like we had so Darren went over and told them what the man had told us, they seemed fine with that but a while later when the other German returned to his van they went over to check with him.

We had dinner and watched the people coming and going, there were mum’s pushing pushchairs, joggers, cyclists, people with swimming costumes all making their way to and from the beach.

After we’d eaten we went for a walk to see what was on the other side of the hedge.  It was wonderful!  There was a cycle path and a promenade then a wide grassy area which ran along beside that,  behind that were sand dunes and the sea.  There were people dancing to salsa music on a wooden platform set up for activities and lots of people swimming and lazing on the beach.

As we walked along the promenade we saw a pier with steps going down into the crystal clear water at intervals along it.  I went down the steps and paddled, the water was lovely and warm and I could see little fish moving around on the sand, Darren told me they were mud skippers (he thinks they were similar to the fish our friend Bryony pointed out to him while they were diving).

The sun was starting to set so I took lots of pictures from under the pier and on top of it.  I watched a water skier doing fancy tricks in the distance and when we looked over to the right of the pier we could see the amazing twisted tower block that I’d seen on the Malmö tourism site, I couldn’t believe my luck that we could actually see it from where we’d parked.

It looked even more amazing as the sun began setting.  I kept saying “how many photos do you need of a sunset” but as the landscape just kept changing and I found myself clicking away it would seem that apparently you need an awful lot of photos of a sunset!

I was amazed that once the sun had gone down everyone went home and the car park was very quiet.