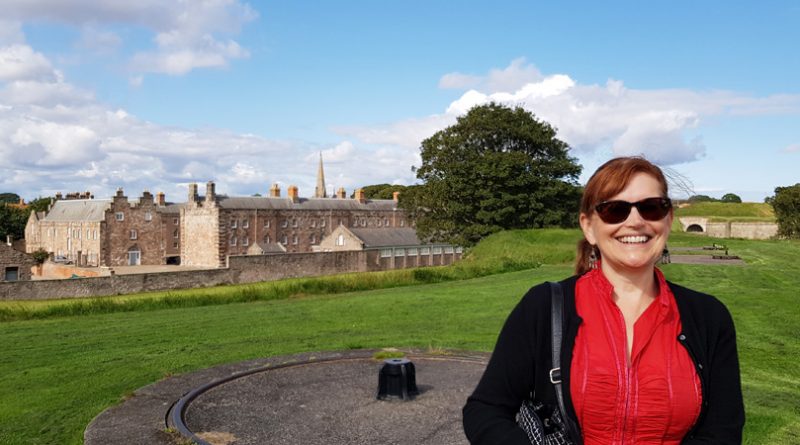 Our plan for today was to go to Berwick upon Tweed by train and maybe go into Newcastle on the way back.

We climbed the many steps up to the train station again and were pleased to see that we’d arrived early, unfortunately the train wasn’t quite so considerate and it arrived 15 minutes late!  Still better late than never.

We’d decided to go to Berwick when we saw a programme by Robson Green where he’d said how beautiful the journey was on the train.  Unfortunately for us we were on the field side of the train, we can see those at home, and the commuters who were sitting on the other side of the aisle had their blinds down because it was so hot so we couldn’t see anything out of those windows.  However we were lucky enough to catch a glimpse of the Lady of the North as the train trundled up to Berwick.  The Lady of the North is a landform sculpture of a reclining naked lady which has been made in a quarry, there are footpaths so you can walk up on to the top of her body, it looks like it would be an amazing place to visit.

When we arrived at Berwick we headed straight for Tourist Information, the lady was very helpful and when I asked her where we could get a coffee she told us about two independent coffee shops nearby.  We chose the Corner House and Darren had strawberry and white chocolate sponge which was delicious and I had a nice scone which was wedge shaped and had been made as I make scones as part of one very large scone.

After coffee we headed up to the city wall and walked along that.  It was wonderful, we had no idea that there was anything like this in our country, we’d walked along fortifications in a few countries and never dreamed that we could do the same in the UK.  The view out to sea was beautiful, the grass on the fortification was vivid green and the sea looked like silver with the sun glinting on the small waves.

As we looked over the wall a bit further along we were surprised to see an awful lot of swans bobbing on the sea, we’d been so surprised when we had seen swans swimming in Baltic in Northern Germany and Sweden, we thought that was unusual, but it seems they do it in the waters around the UK as well.  You live and learn!  It was quite amazing to see how they slept with their necks contorted so that they could rest their heads on their backs, how can that be restful?  Every so often we’d catch sight of a swan floating along with its huge black webbed foot sticking out behind it like a rudder.

We had noticed a lighthouse while I was taking photos and as we looked down over the sea and swans we saw people walking along the road at a lower level, so we went down to explore.

The road took us under a bridge and along a harbour wall which became very windy when we walked around the corner.  Thank goodness for the sea wall which I’m sure shielded us a lot from the worst of the wind.

As we neared the lighthouse we stopped to look out to sea near a man with binoculars and he started chatting to us.  He said he was looking for dolphins, apparently they’d been in the bay earlier.  He was setting up a website so that locals could log where they’d seen whales and dolphins. He said they had minke whales and there had been a killer whale in the bay recently (it goes without saying that they were nowhere to be seen whilst we stood there).

As he chatted a young Chinese man came and asked I’d take his photo with his phone.  It became quite a photo session and it ended with me taking photos of him jumping off a bollard.  He had a quick look when we’d finished and I was very proud of the photo of him jumping, it looked great.  He was lucky because at that moment the battery on his phone died.  He told me he had two hours to go before he had to catch his train to Glasgow where he was meeting his family, then he thanked me, shook my hand and raced off back to the road.

During that time Darren had started walking towards the lighthouse with the man with the binoculars.  He was a very interesting man who had studied English at Cambridge and had travelled widely. He’d been born in Norfolk but after all his travels had bought a house in a remote, peaceful area a few miles away from Berwick upon Tweed and settled there.  It sounds like he’s taught English over the years.  He warned us that as we got to the lighthouse it would become much colder due to the arctic wind and he was quite right.

We stood by the lighthouse and chatted for ages, he mentioned a couple of places to visit the next time we were up here, which we will do, but we weren’t lucky enough to see any dolphins, better luck next time.  He said to look online mid October and he hoped to have his website up and running  berwickdolphins.co.uk. We mentioned having seen a lot of ‘rock’ whales during our travels so he asked me whether I could draw a cartoon rock whale, unfortunately I’m not sure I’m that skilled an artist!  He told us he was meeting his partner in Staithes the following day so we suggested they had tea and scones at Dotty’s.  He was interested to hear that whale watching trips were being advertised in Staithes and Whitby as the local man who ran trips in Berwick hadn’t ever advertised the fact.

We eventually parted company when he realised that he hadn’t taken any of the photos he had meant to.  We’re looking forward to seeing his website.

We carried on with our walk and I started photographing the bridges in the distance when Darren spied a cafe down by the water beside the stone bridge so we wandered down for lunch and I took loads of photos of a mummy seagull who was hanging around waiting for her moment to snatch some food from the table.  She tried sneaking up on a couple eating fish and chips but they noticed and walked away.  By this time her baby had woken up and was making it very obvious that he was hungry, he even started following her.  I hope she was eventually able to feed him.

On our way back to the train we stopped and photographed the viaduct and the ruins of the castle, then walked back through the gardens to the station.

We both loved Berwick, I’m so glad we didn’t get the train the previous day because we’d have had far less time here and wouldn’t have met the ‘dolphins’ man.

Our train journey back was a right tease, not only were we on the right hand side of the train again but we were also sitting beside a wall and could only glimpse the landscape through a little gap in front of the passenger on the other side of the aisle. It turns out Robson Green was quite right, the sea view side of the train is stunning, if only we could have seen it clearly.  Maybe next time!

We gave up on the idea of getting off the train at Newcastle, we were both tired and it looked like it was going to rain so when we got back to Durham we popped into a cafe for something to eat, (we’d hoped to go into the ice cream parlour but they were just closing).

Unfortunately the cheese scone I ate was not as good as those my friend Margaret makes but stopping for tea proved to be good luck for us.

We’d decided on Wednesday that we’d look round Durham on Friday but while we were in the tea room we suddenly realised that we were meant to be in Bishop Auckland on Friday! We’d intended going back into the men’s outfitters ‘Woven’ to buy Darren some trousers as the staff had been so helpful the previous day and we were very disappointed when we realised that wasn’t going to happen, until Darren pointed out that it was only 4.30 p.m. so we still had an hour to find something! Hurrah!

The service in the shop was second to none and consequently we ended up leaving the shop, with our wares, 3 pairs of very nice jeans, a jacket and 3 pairs of snazzy socks chosen moments before the bill was tallied up, there was still one other customer choosing shirts at 6.00 p.m. but the owner said it wasn’t a problem as they sometimes stayed open until 7.00 p.m.   Hurrah for independent shops who can make their own rules!

We quickly made our way back along the river path to our van as it started to spit with rain.

Back at the van I sat and watched lots of people rowing on the river, I wish I had their energy.