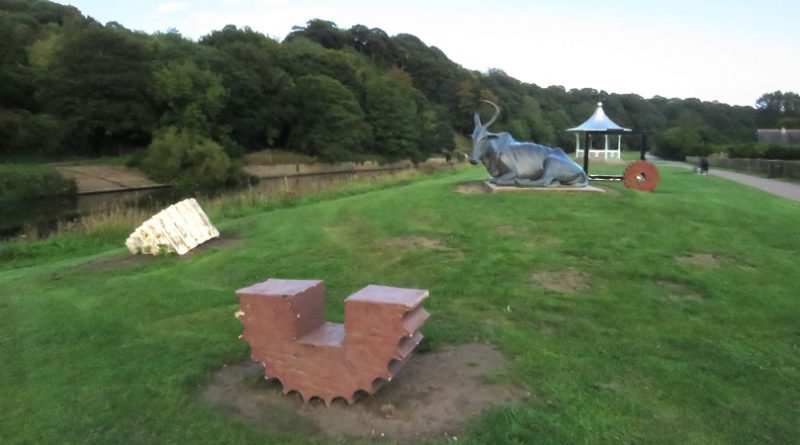 This morning we cleared up, I had a quick walk around the campsite and took a couple of photos of the pond then I popped into reception to see whether they sold eggs from their free range hens.

It turned out the hens had laid four eggs which the owner put in a cute four egg box with a Serenity sticker on it.

Darren successfully negotiated the tight entrance to the campsite.

Our journey to Durham was uneventful although we had a lovely surprise when we came to an area where there were loads of poppies on all the roundabouts.

As we arrived on the outskirts of Durham our SAT NAV decided it wanted to take us down a teeny road with parked cars on either side instead of down the main road, luckily I had Google maps running on my phone and it gave us a different route which fortuitously Darren followed.

We found the lane into the camp site without any trouble but as with most campsites the lane was very narrow and we feared for our dodgy taped up wing mirror.  Nevertheless Darren made it safely and as we were the first to arrive we parked in the prime position overlooking the river, it was perfect timing because 10 minutes later a caravan arrived and also parked up.

We had decided to catch the train to Berwick upon Tweed today so we raced off along the river path into the city to the station.  That proved to be harder to find than we’d expected, it took us ages of bumbling around AND it was at the top of a VERY steep hill.  When we finally got to the station we discovered that the cost of the tickets to Berwick upon Tweed had sky rocketed since I’d looked at them the previous day so we decided to buy tickets for the following day and come back, after all the exercise will do us good!

We wandered back into the city going a different way this time and we found a lovely cafe called Ciao Ciao where we sat and had a tasty meal looking out over Durham Castle.

We enjoyed exploring Durham, we discovered a square where we sat and listened to my cousin’s radio programme and then had a browse through an indoor market near by.  We even broke a habit of a lifetime and had a look in some shops where we bought some clothes for Darren.

Then I spotted an ice cream parlour called Split & Glory, this day just keeps getting better and better.  It was at the top of a beautiful old building and had been designed to look like an American ice cream parlour.  The ice cream was superb and we both had sundaes.

When we’d finished scoffing those we carried on exploring Durham, what a beautiful city.

I’ve wanted to come here for years and I’m glad we finally made it.