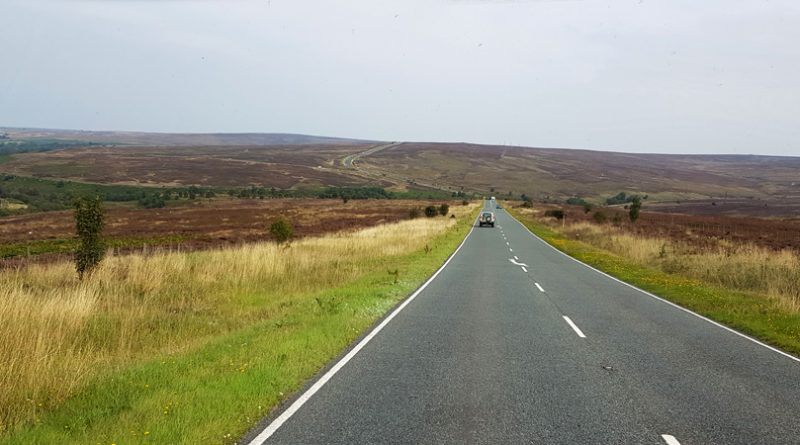 This morning we got up early (for us) with the intention of rushing off to Whitby and taking the steam train to Pickering and back to Whitby.  Unfortunately we then decided to have breakfast whilst the water was heating, had a shower once the water had heated, emptied the toilet and grey water and rubbish bins and by the time we actually left Mr Moo’s the SAT NAV said we’d arrive at Whitby by 11.29.  We had intended getting there for 10 o’clock!

The SAT NAV then took us on a much longer route than was needed, or indeed expected, compared with the route Google maps had suggested.  However we had a beautiful drive across the moors (when we eventually got to the moors).

We stopped at the Whitby Park and Ride, which unlike our experience of European Park and Rides did “exactly what it says on the tin” but not before we were mislead by the sign at the entrance to the Park and Ride and drove into the ‘Buses Only’ section.

We realised we’d gone the wrong way as soon as we drove in but the only thing Darren could do was to follow the road round and back out to the roundabout.  We were half way along the road when a lady called out and came rushing towards us, Darren stopped and a man overtook her.  It turns out they were both being helpful.  The man came over to tell us that we were in the wrong section and then gave us directions to the area we were supposed to be in.  I wonder how often other motorhomes do the same thing considering the motorhome sign has an arrow pointing straight ahead (along the lane where the buses drive) whereas the car sign points to the left!

We found the overflow car park which is where the motorhomes park, we thought it would be very busy, no doubt it is at weekends, but we were the only vehicle there.

The Park and Ride was brilliant, it was free to park and cheap to ride on the bus AND there was a bus waiting as we got to the bus stop.  Superb!  I did have one disappointing moment due to my stupidity, as we were waiting for the other people to get on the bus I suddenly remembered that I’d left my camera in the van.  Aaaargh!  Too late mate!

We scuttled right to the back of the bus, we don’t go on buses very often so it was great getting the back seat.  It gave us a good view down the bus.  There was a very well behaved red setter sitting in the aisle, she looked so regal.

I think Darren was very pleased that the bus driver took the strain of the journey into Whitby, she had to drive down some very narrow streets, some made narrower by people parking in dodgy places.

When we arrived in the town we immediately went to the station where the Tourist Information was situated (which fortuitously was right beside the bus station).

The tourist information lady was very helpful, she told us all about the train times and explained that as we would have to wait for the 12.45 train we’d have a wait of one hour at two of the stations on the route.  Out of the corner of my eye I caught sight of the expression on Darren’s face, so did the lady, she laughed and said “Judging by the look on your face I’m not sure you’re going to be travelling on the train today”, it turns out she was quite correct.

We wandered over to have a quick look at the boats then our stomachs told us it was time to find somewhere to eat.

We went over to a fish and chip shop across the road called Trenchers where we had a very nice meal in the restaurant, I’ve been looking forward to some Northern chips.  We don’t eat chips very often but recently we’ve tried our local chip shop and been disappointed, we’ve also driven  down to the South Coast in our search for good chips.  We used to visit a chip shop at Southsea called Rock and Sole, they used to make AMAZING chips and gorgeous pea fritters but they’d been taken over by another company while we were away on our trip and it had become so bad that the shop had closed down.  We tried somewhere else near Portchester Castle but as we sat down beside the castle to eat our chips we were very disappointed to discover they were under cooked and soggy.

Darren’s Aunty June worked in a chip shop in Dinnington, South Yorkshire for many years and it sold a wide range of tasty fried treats, happily so did the restaurant we were currently in at Whitby and it was beautifully decorated art deco style.

We waddled out from the restaurant, full to bursting.  We intended sightseeing but sidetracked instead and went into a shop first to see if we could buy the items we’d forgotten to bring with us.

We found a couple of things but couldn’t find an alarm clock.  The assistant suggested a shop a bit further along the road which might have one so we trudged along there and bought a lot of other things we didn’t know we needed, they didn’t have a small alarm clock either but luckily as we walked back along the street I noticed a tiny shop with watches in the window.

The lady was very helpful, she had lots of alarm clocks AND while we were deciding which one we wanted I noticed she had fold up rucksacks too, which was just what we needed.  Darren left the shop with a much lighter wallet and unfortunately we then noticed a shop which had lots of very unusual shoes in the window so we went upstairs to see what they were selling, 20 minutes later we came out again with my new walking shoes swinging in a bag over my shoulder!

Whitby was proving to be an expensive day out, it has far too many independent (interesting) shops!

After all that expense we were completely shopped out but thrilled that we had managed to get most of the things we needed on our list.

We finally got on with exploring Whitby and walked up to the abbey on the top of the hill.  I’ve been looking forward to visiting Whitby for years when I saw the abbey on a TV programme.  Sod’s Law says that today a sea mist was swirling around the church and the abbey making them both look very atmospheric and I only had my phone camera to take photos with.  Once again, aaaaaargh!

We thoroughly enjoyed walking round Whitby, I want to come back again for a longer wander.  As we walked back through the streets we came to a tea room, one of many in Whitby and we went in for tea and cake, unfortunately as we made our minds up to have a cream tea the two people in front of us had the last two scones!  However our second choice, the Victoria Sandwich was very nice.

We wandered back to the bus station after tea and caught the bus back to the Park and Ride car park.

As we were making our way to the exit Darren’s phone rang, it was the owner of Serenity campsite checking to see what time we’d be arriving, we were able to say 15 minutes and sure enough 15 minutes later we arrived at the site.

The sea mist appeared to have turned into drizzly rain which was fine with us (although we continued to convince ourselves that it was sea mist), we parked on our pitch and settled down with a bottle of Belgium beer (which we’d also bought in Whitby) and chilled out for the evening, watching Vanity Fair before bed.