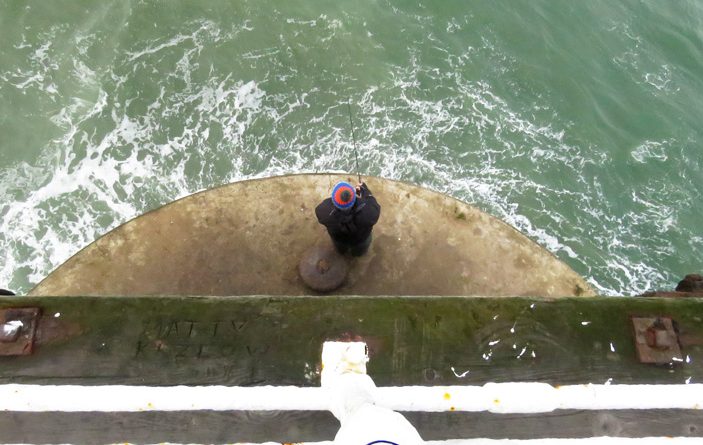 It was a lovely peaceful but rainy night.

This morning we’d decided to walk into Staithes and possibly along the coastal path to Runswick Bay, however we also wanted to go back to Whitby.  It was raining lightly when we left the van, so light that I hadn’t noticed beforehand and had to go back in to get my raincoat.

We weren’t really sure of the route so it was very handy that a man called us over as we stood trying to decide which path to take.  I was quite surprised to hear a Welsh accent, I was expecting a Yorkshire one!  He suggested we walked along the coastal path rather than the main road and he gave us directions to it.

The walk into Staithes was beautiful and we met a number of people also walking away from Staithes along the Cleveland Way.

A large group of walkers came towards us and they all said “good morning” as they passed.  It felt rather strange saying “good morning” so many times in a row but it was very nice to come across so many happy and contented people.

Further along the path we met a family walking up a steep hill with two greyhounds, one of them was NOT impressed that she had to walk up there.  Her owner said her dog liked to limit her walk to an hour and they’d gone over that so she wasn’t impressed, she’d rather have been at home snuggled up in her bed.  She was a beautiful colour, she had stripes of brown, is that called brindal?

Further along the path we came to a finger post with three points and couldn’t decide which way we needed to go.

We walked down the stone path into Staithes and the path down into the village reminded us both of our walk into the bay along from Las Negras in Spain.  I wish I’d taken a photo as we’d arrived in the village, it was so pretty but we stopped to give directions to the coastal path to a couple who asked the way there and then I completely forgot.

We enjoyed our walk around the village, it is such a pretty village AND we found a tea room called Dotty’s which made the most AMAZING scones.  We were welcomed by a nice waiter and we asked him about the cream tea.  He said it came with one scone and a pot of tea.  We were rather disappointed that there was only going to be one scone each until the cream tea arrived at our table.  The scones were ENORMOUS and absolutely gorgeous, they were as good as my friend Margaret’s scones and hers are wonderful.  I don’t know if it’s a Yorkshire thing but they don’t skimp on their tea and every place we’ve been to it’s been nice and strong too.

We had a nice chat to a lady who was waiting to use the toilet behind us.  She was over from Lancaster, they’d stayed on the campsite we were on last night and were now making their way over to Cumbria.  She said they’d intended going to Anglesey when they set off but the weather was so mankey that they changed direction and ended up here.  We told her we were off to Durham and she said her son had gone to Durham University and that it was a beautiful city.  We told her that our son Austyn had gone to Lancaster Uni, what a small world.

After we’d finished ‘gas bagging’ we looked at the time and decided that if we wanted to go to Whitby we’d need to catch the bus so we walked back up the VERY steep hill, popped into Tourist Information at the top to find out where the bus stop was and then carried on out to the main road where we’d been directed.

We had a lovely journey into Whitby through pretty countryside, it was nice for Darren to be able to sit back and enjoy the scenery for a change.

In Whitby we walked past two buses face to face in the road with their bonnets open, just past the traffic lights, they were creating havoc, that’s not something you see every day luckily.  The poor man who had the misfortune of being beside them kept having people give him the finger or shout at him as they overtook the buses on the wrong side of the road, I can’t understand why he was getting so much abuse when it was his right of way!  From the confused look on his face he didn’t know what crime he was being accused of either!

From the bus station we wandered through the meandering lanes then walked out on to the harbour wall.

Suddenly a young Japanese girl ran over and asked if I would take a photo of her and her family, it always worries me that I’ll take a bad photo because I can never see the screen clearly.  I asked her to check them before I left and as  she was happy with them we carried on along the jetty.

It was damned blowy out there and we could see the sea through the big gaps in the wooden, eeek!   A lady walked past carrying her little white dog, I commented to her and she laughed and said her tiny dog was so scared because her little foot had gone between the gap so she’d had to pick her up.  I could completely understand her pain, Darren laughed at me because I was walking strangely along the planks!  Cheeky!

We spent a long time out at the end of the wall until Darren started to freeze.  It was surprising how much warmer it was when we got back into town.

We went in search of a coffee at that point but stumbled across a men’s clothes shop called Spider instead and bought Darren some well needed clothes.

Unfortunately it was closing time when we left and the coffee shops were no longer open, just as the shop owner had predicted, so we popped into the beer shops again and then went and stocked up on salad and veggies in Co-Op and caught the bus back to Hinderwell where we were staying.

Unfortunately (or fortunately, depending on your point of view) we had to walk past the chip shop on the way to the campsite and it would have been rude not to go in.  As the lady behind the counter handed us our fish and chip parcels, or in my case my cheesy puff and chip parcel, she laughed when I showed her our bags full of healthy veggies.

We enjoyed our food a lot it went very well with a couple of shared Belgium beers.  What a great day.